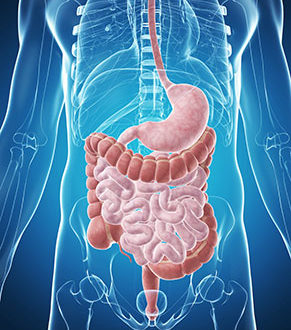 Mucoid Plaques in the Gut

Mucoid plaque, which is known in medical literature as Biofilm (1), Intestinal Metaplasia, Mucin (abnormal kind) and others, can grow inside the intestines on the mucosa walls. The presence of this substance inhibits the proper absorption of nutrients and provides a breeding ground for unfriendly bacteria, fungi and parasites.

The presence of this substances has been associated with a whole host of illness and disease, which stem from the unhealthy condition it creates in the colon (2).

How is It Created?

Mucoid plaque, or Biofilm, is created by the long term consumption of foods that are not healthy for human consumption, taking drugs, probiotics, stress, living in toxic environments, and other situations that causes the body to secrete mucous into its’ alimentary canals and hollow organs.

Mucous is the bodies attempt to protect itself from hash substances or conditions that can damage it’s delicate mucosa lining. Ordinarily this would not cause long term problems, as the body could effectively remove the mucous the following day, when the source of toxins is removed from the environment or diet. However if a person continues to consume the unhealthy food, smoke the cigarettes, take the drugs etc, then the mucous bonds together and forms a kind of film, which the body has difficulty removing.

Its formation takes place as a result of the mucous cells, and the bacteria living in them adhering to each other and producing a film. Wikipedia states “These adherent cells are frequently embedded within a self-produced matrix of extracellular polymeric substance (EPS). Biofilm EPS, which is also referred to as slime (although not everything described as slime is a biofilm), is a polymeric conglomeration generally composed of extracellular DNA, proteins, and polysaccharides.” (3)

This film can be very thin, or even up to a quarter of an inch thick, and of a rubbery consistency. It is hard to detect during a colonoscopy as it adheres well to the bowel walls and takes on the shape of the colon. However it’s existence has been confirmed during autopsies and also by anyone performing a good colon cleanse. The mucoid plaque comes out in a variety of forms from wispy films to rubbery ropes which can be dark in color; they may also have a distinct odor. 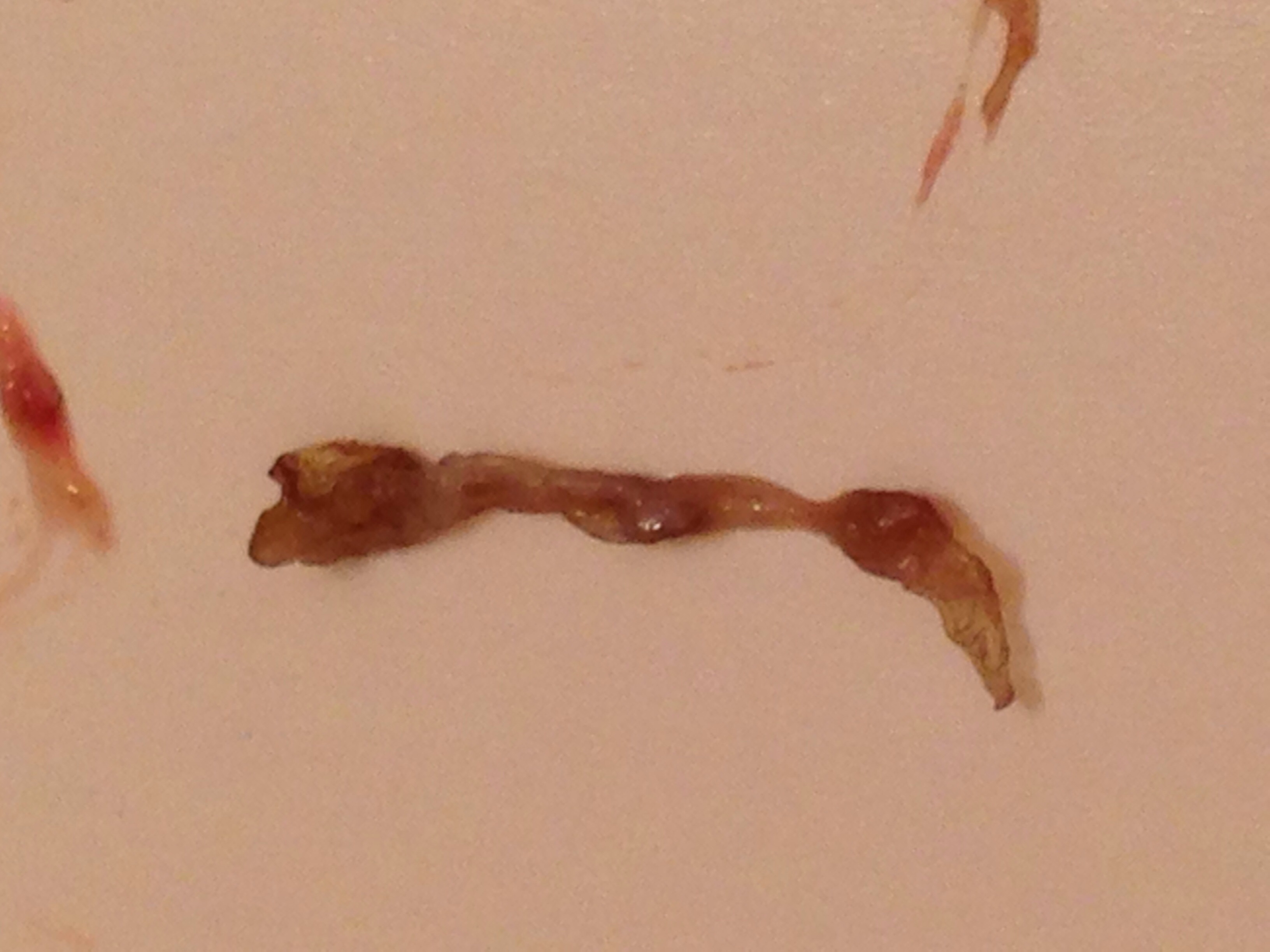 The image to the left is a small but very typical plaque expelled from the gut during an herbal plaque purge.

The microscopic image above shows a candida (yeast) mat forming as a result of stagnant, mucoid material.  Yeast exists in the gut normally and beneficially as spores that assist with food break-down.   When yeast stagnates, it grows [hyphe, the organism “body”] into thickened and putrefying plaques of many rancid substances.  Trapped, the putrid plaques disrupt normal mucosal protection, reduce absorption, inflame the gut, allow leaking of toxins through the gut and many subsequent disease states.  Satiation from sweet foods can be reduced and result in our excessive sugar intake. 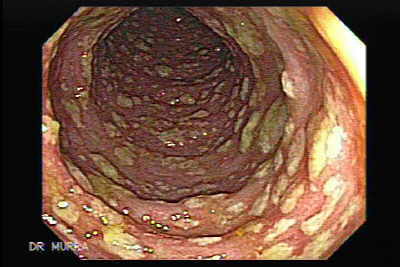 In general almost all fresh fruits and vegetables do not cause mucous, and they are the perfect food for human consumption. This is due to their ease of digestibility, mineral makeup, and lack of anything which is considered as toxic, or damaging to the body. Steaming or baking vegetables also maintains their non-mucous forming qualities, but lessens it.

At the other end of the spectrum is meat and animal products, 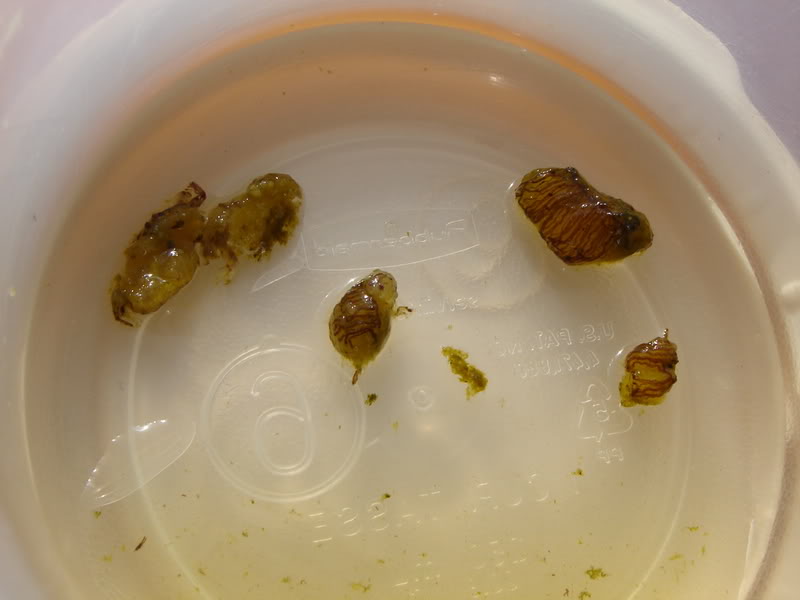 in which all of them are highly mucous forming. You only need to drink a glass of cows milk, or eat some cheese to see the effect. Humans posses a digestive system that is designed to consume vegetables, fruits, seeds and nuts. It is much longer than that of other meat eating animals, and the meat starts rotting inside us, due to the long transit time, hence the reason why heavy meat eaters have such smelly stools. Our stomach acid is also not as strong as that of other meat eaters, and the meat is usually not properly digested upon leaving the stomach, thus causing undigested proteins to enter the small intestines, and setting of a large mucous reaction within the whole digestive tract, as the body attempts to protect itself from the half digested, soon to rot proteins.

Seeds, beans, grains and nuts are mucous forming when un sprouted, but not nearly as acid/mucous forming as animal products. Proteins and starches from seeds, nuts and grains are 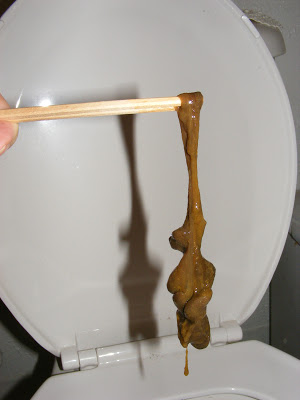 generally well digested by most people (except those with gluten allergies etc) and can provide good nutrition for the human body. Optimal digestion and nutrition however could be achieved by sprouting them prior to eating. The sprouting softens them, increases their vitamin content, and also activates enzymes which help with the digestion process. The more they are sprouted the less mucous forming they become.

Of all the seeds, beans, grains and nuts (or vegetable foods high in protein or starch), the soya bean is probably the most acid forming. Next are the nuts, then pulses, then seeds and grains. There are some exceptions however, and the prior generalizations are just that. Quinoa for example is actually alkaline forming, and contains high amounts of readily digestible protein and starch, making it probably the most suitable grain for human consumption. Brown rice is also very suitable, and is about neutral.

Salt is also highly acid forming, as is refined sugar and fried, or cooked oil. So the addition of any of these to a meal will alter its composition. 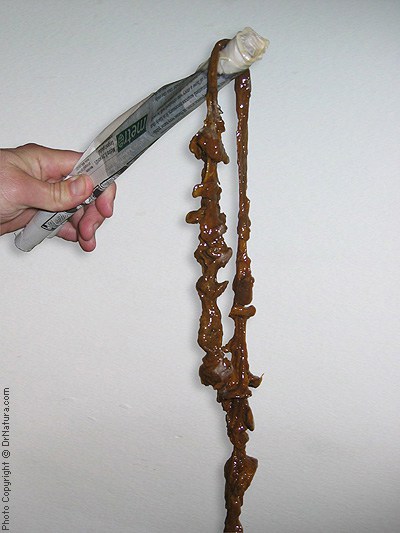 Mucoid plaque provides a perfect breeding ground for parasites, unfriendly bacteria, and fungus, which in turn further inhibit digestion and poison the body. Much of the bodies alkaline mineral reserves would already be depleted by this point, and it becomes necessary for the body to start drawing minerals from it’s deep reserves, such as calcium from bones etc., in an attempt to keep the blood at the correct PH, and also to continue supplying the bodies vital functions, whilst still trying to neutralize the acids being created by the colons organisms, and also the acids from the foods consumed.

This situation makes the body more acidic and has been associated with diseases and cancer by some natural health practitioners, and also certain medical doctors and nutritionists. (4) 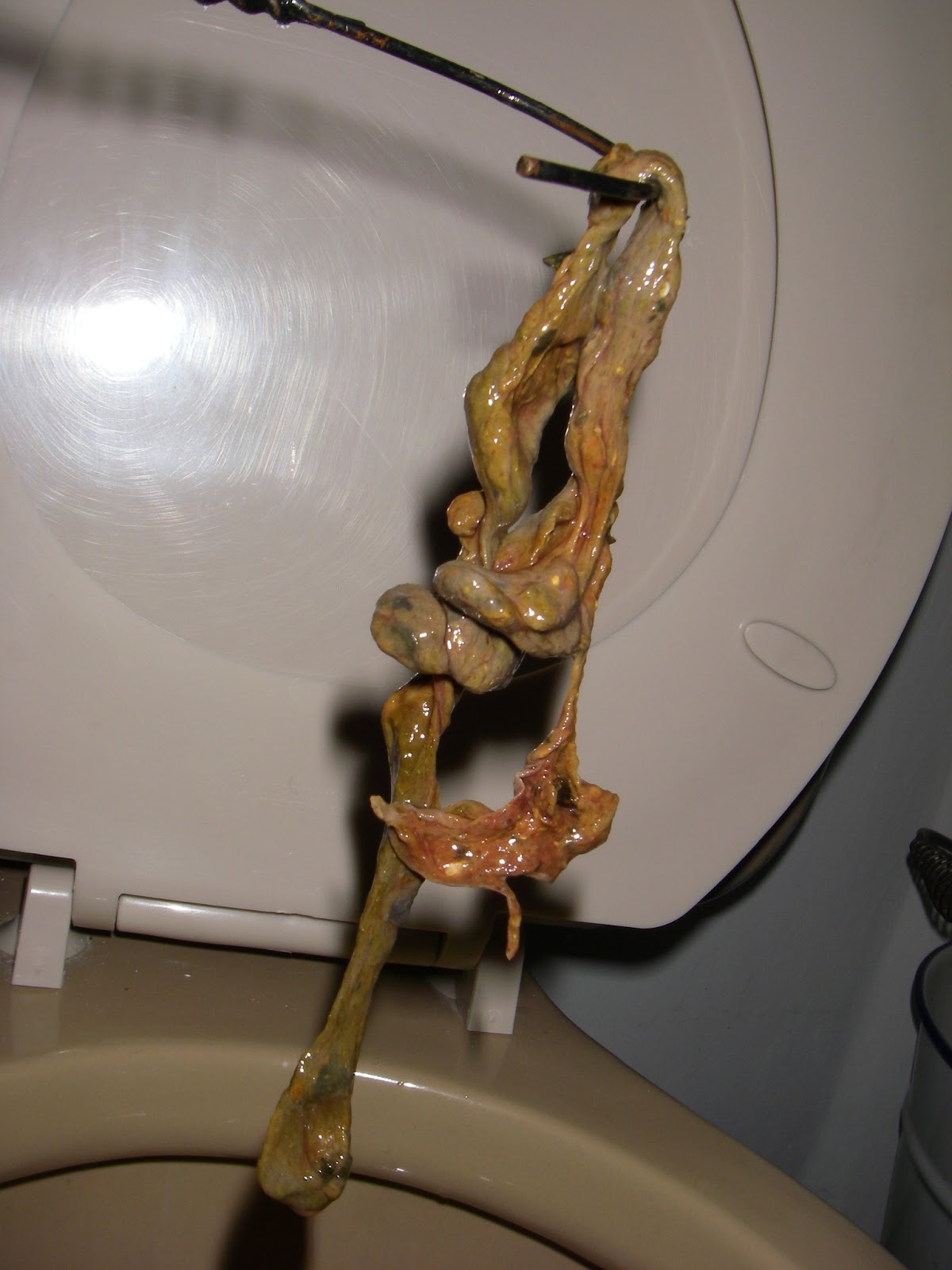 To remove mucoid plaque, first we should fix the root of the problem, which is the diet. A diet of either 100% alkaline forming vegan food, or up to 70% alkaline forming, 30% acid forming vegan food is suitable for good human health. Such eating habits could consist of fruits for breakfast and dinner, and some starchy or high protein grains such as brown rice or quinoa, with vegetables for lunch. Wholegrain breads, pulses, beans and nuts could also be consumed. Such eating habits would generally not contribute to an excessive buildup of mucoid in the colon.

After the food intake has been adjusted, then a suitable colon cleanse or detox could be performed, which will help to loosen and remove the mucoid plaque. Such a cleanse should consist of certain organic herbs, and also a shake which contains bentonite clay, as it effectively binds and removes the mucous. A period of either fasting, or modifying the diet is also necessary. Please refer to our detox reviews for more information.

Referral: Dr. Daniels Vitality Capsules are composed of gentle cleansing and gut nourishing agents.  Further supplementation can include bentonite clay, psillium husks, juicing, raw-vegetable/fruit smoothies and high-fiber dietary intake (sound, prebiotic [feeds healthy guy flora] nourishment).  A commitment should be made to seeing a cleanse through, especially if some plaque-forming foods continue to be eaten (purge the gut properly and re-purge periodically) and a purge is repeated every year or 6 months.  Some formulas can be used consistently but the best health outcome is through elimination of generally putrefying, sugary, meaty, milk-products and highly processed food.

Prebiotics are essential – search vitaminagent; prebiotics; probiotics – essential to support the positive bacteria.   There must be the regular use of prebiotic intake to even maintain the microbes which absorb nutrients – especially the vitamins, minerals and trace elements.  Do not negate the natural system which is built upon a variety (high diversity) of vegetal foods which are necessary for healthy mucosal linings of the digestive tract, absorbtion of useful (essential substances) and in-tact barrier from toxins which should remain in the gut and flow out of the body. 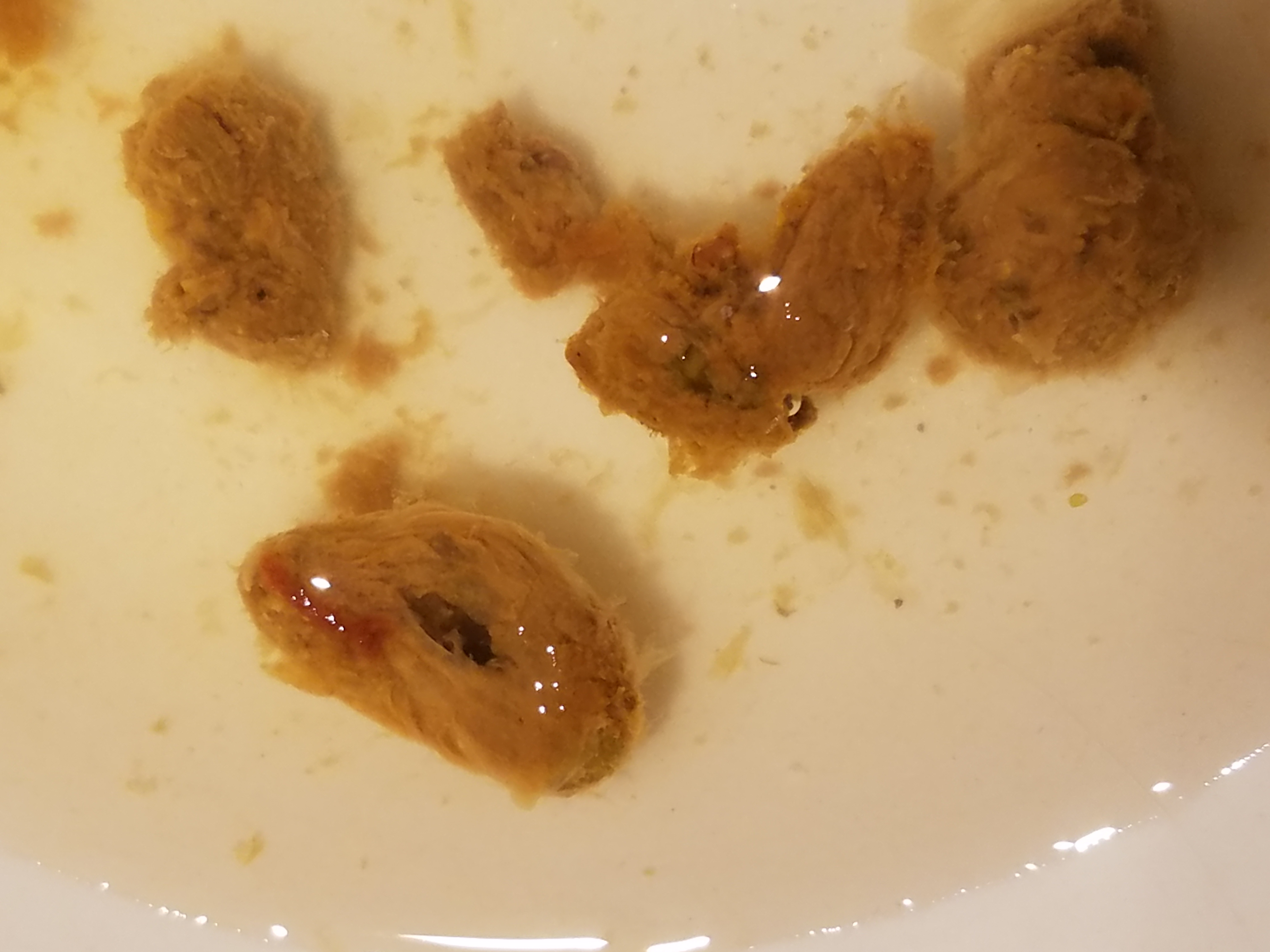 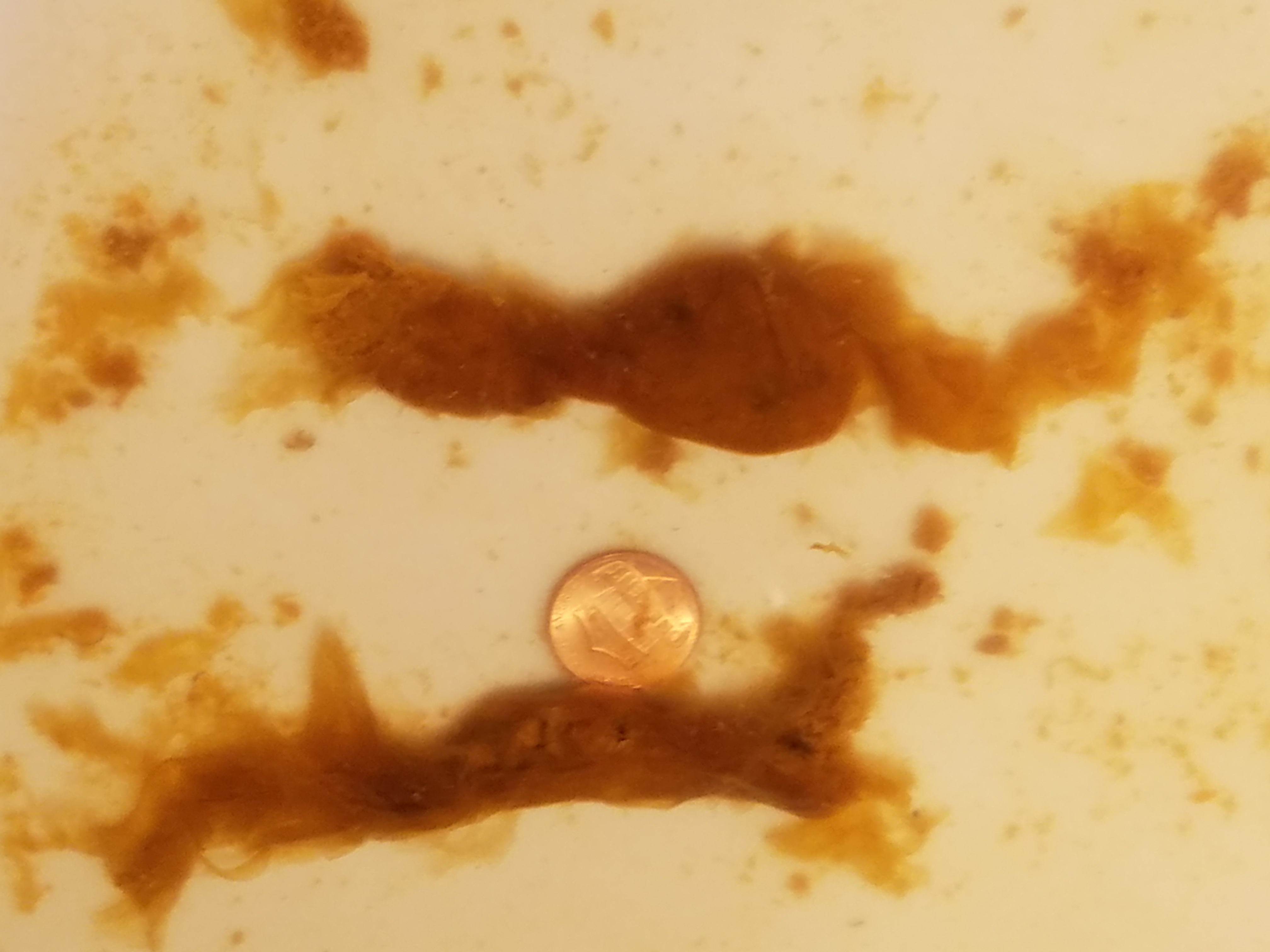 The plaques to the left are from a “clean-diet” of mostly vegetable foods, low meat intake and whole grain-only foods.

These forms are  approximately 1″ X  1/2″ .  They are of a rubbery consistency and unlike any food or other excrement in character.

Yeast hyphe create the substance which enables a continued thickening and durability of masses which elongate as as part of yeast/biofilm conglomerate.

Sections of a larger biofilm are evident. Whispy strands of film can be seen at either end.

More dramatic plaques are more readily identified due to their length, consistency and color.

Long plaques are easily seen in stool and felt during defecatioon. However difficult, during a cleansing regimen, it is helpful to visualize and appreciate what has been removes from the bowel.

For your edification – not only “dead-weight”, the plaques degrade intestinal mucosa and facilitate toxemia by allowing some degree of  toxic leakage through the normal, healthy gut mucosa. 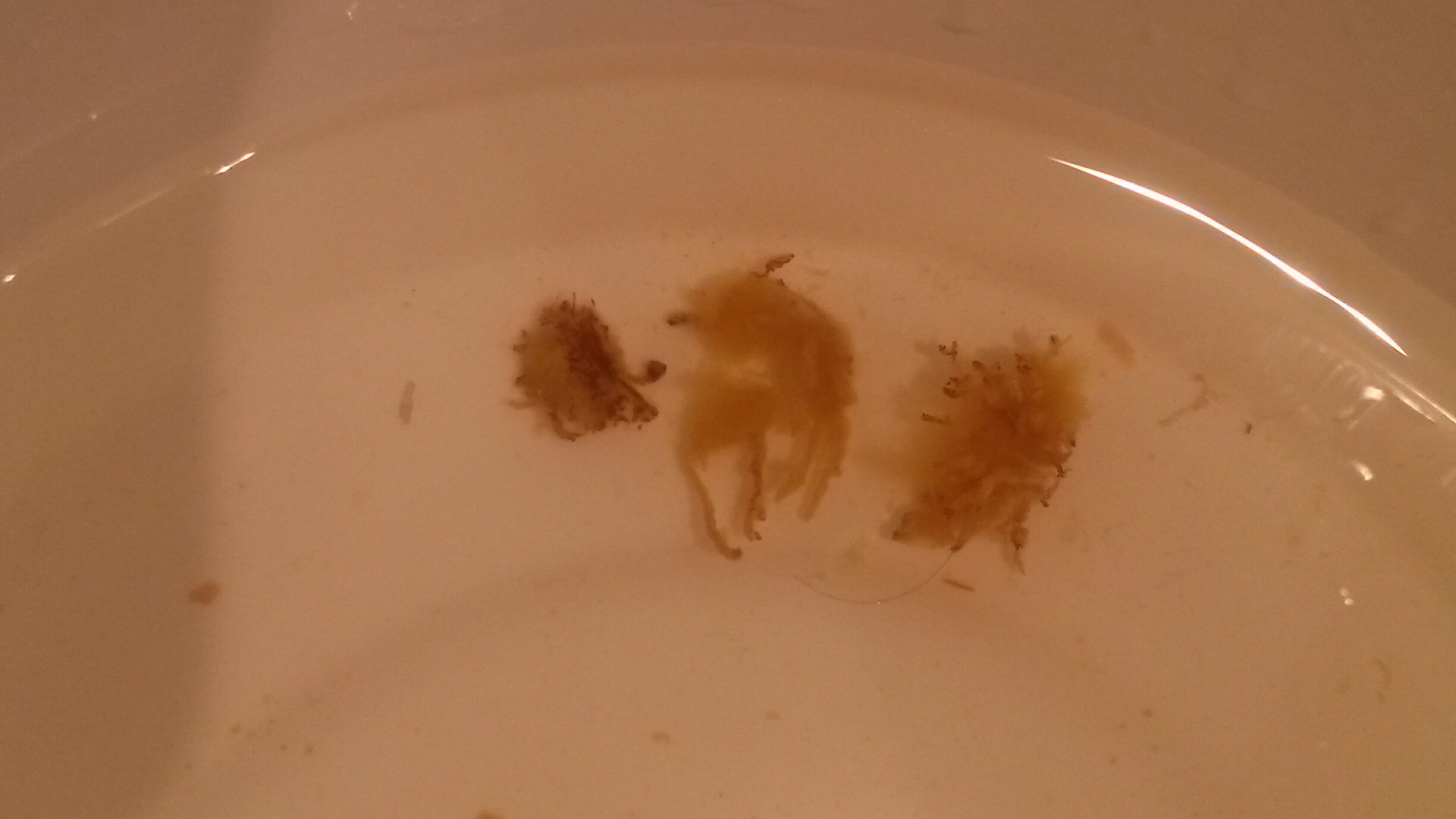 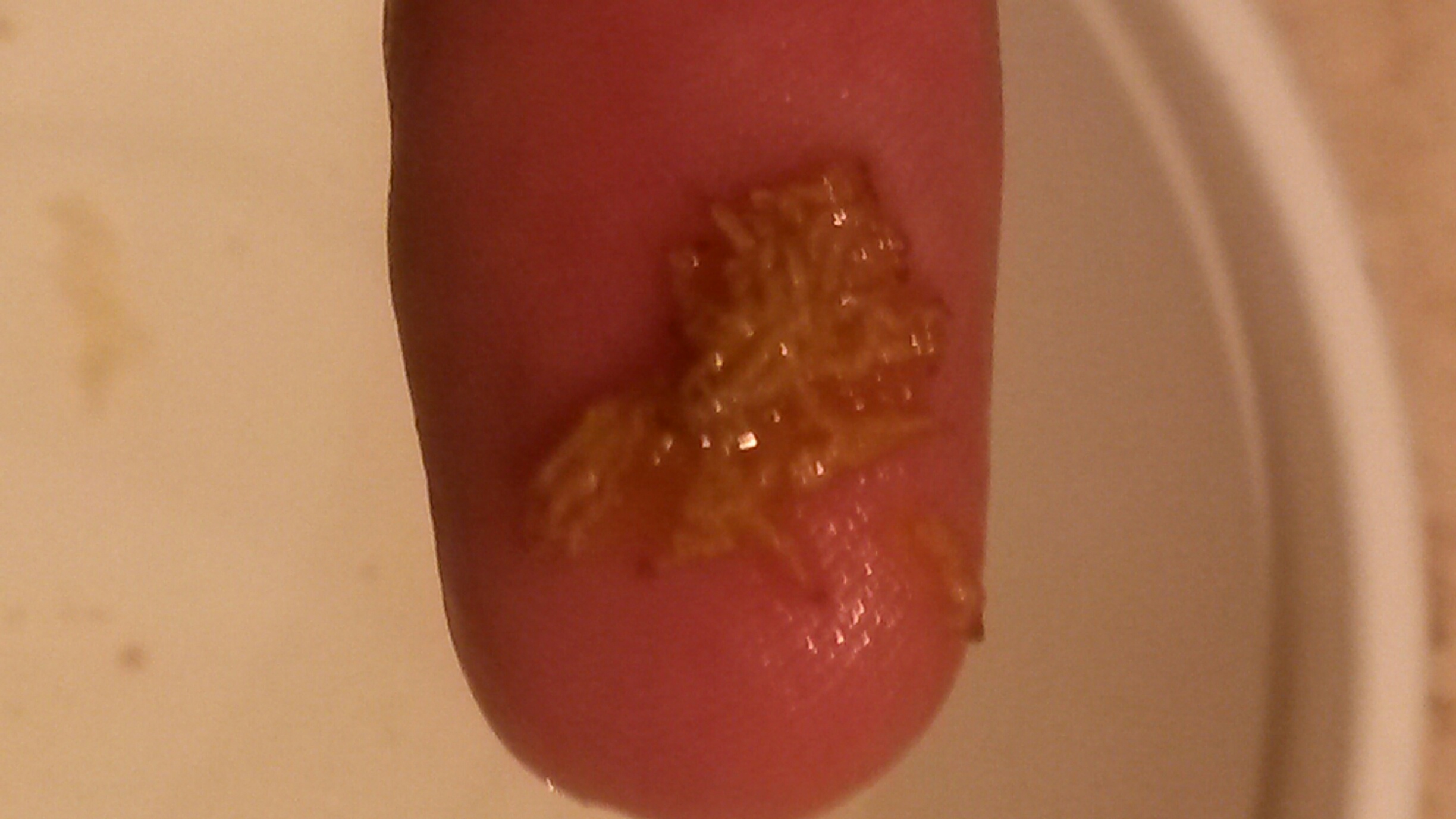 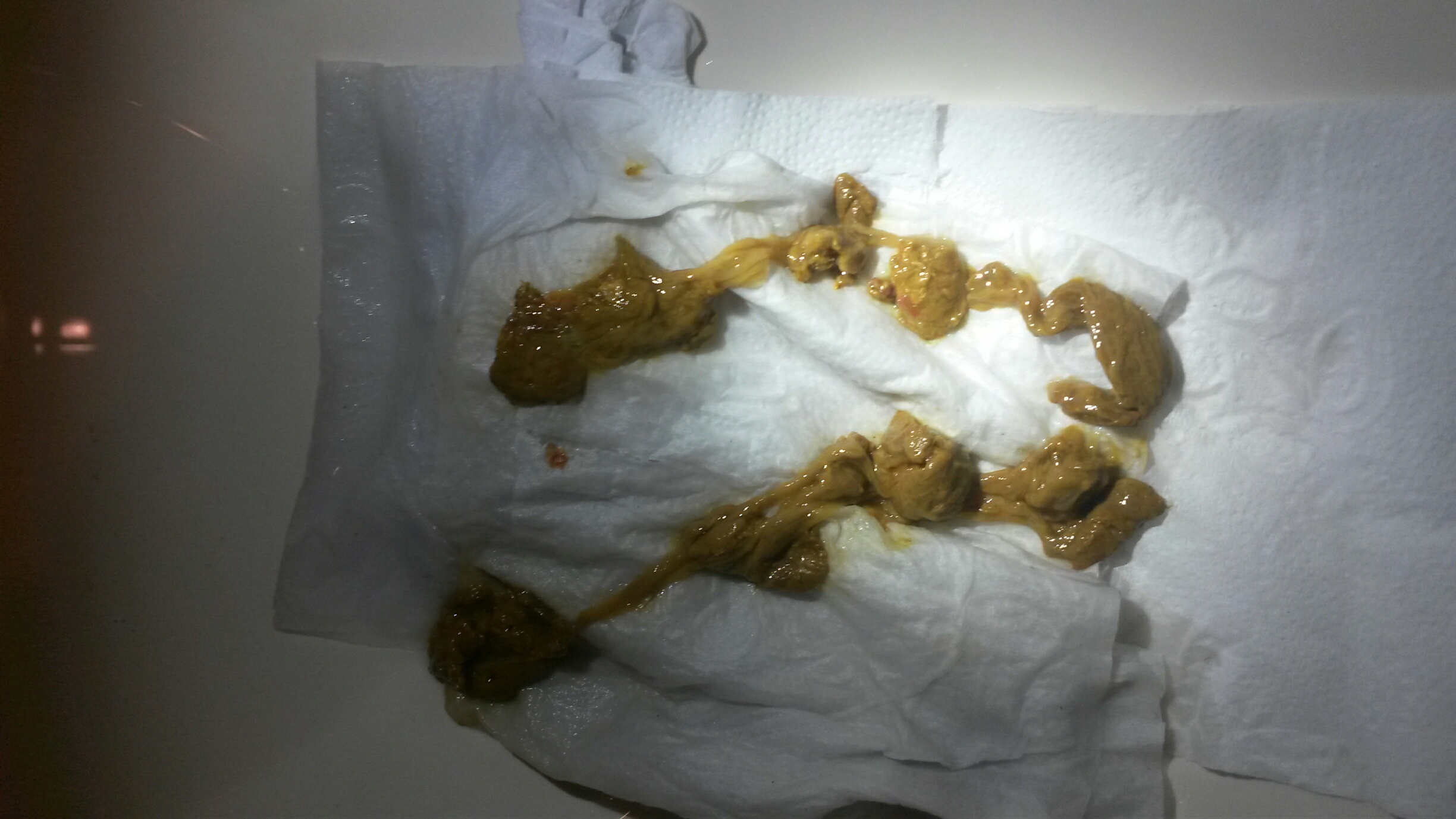 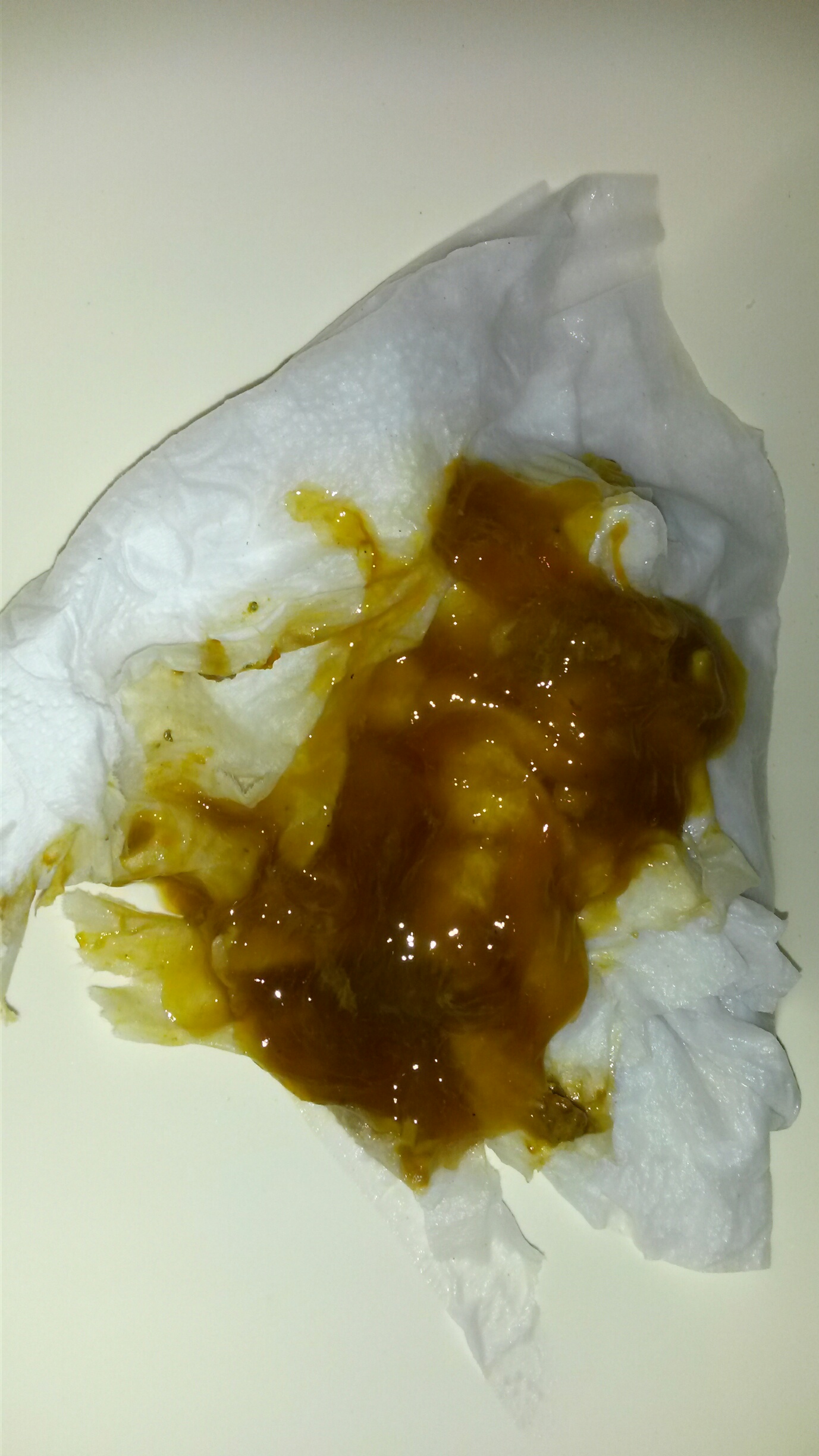 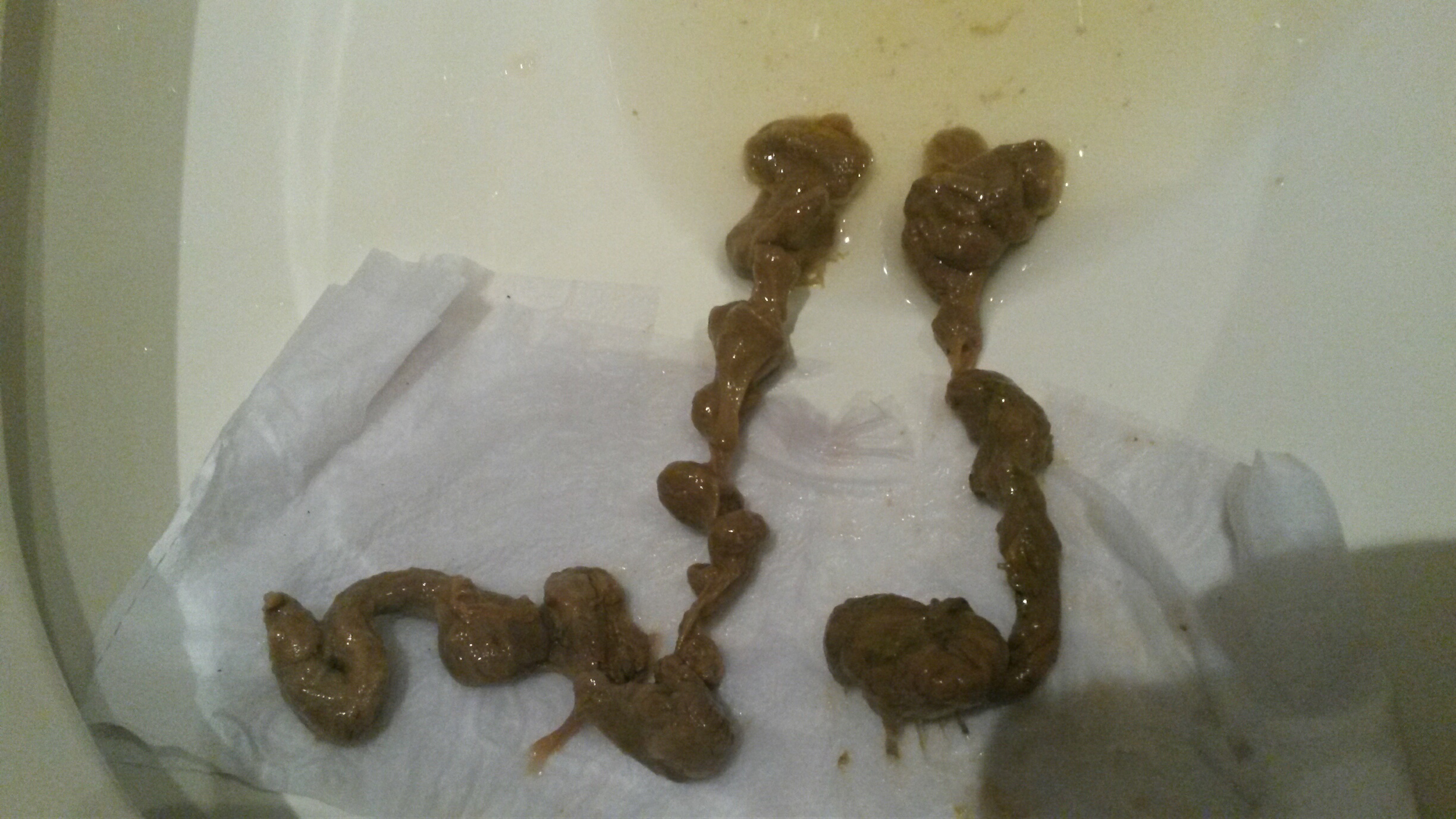 Small forms of yeast can be found when probing feces.  They are durable and rubbery.  They are dissimilar to any food as you may note from the fungal body images to the right.  Sporocarp, or fruiting bodies in feces are due to delayed movement of the bowel contents and an excessive number of fungi.

Other, crushed and liberated fungal artifacts. Again, no resemblance to any food entering the mouth or formation in the digestive system.

Large mucoid biofilms. Expelled using Dr. Daniels Vitality Capsules under the direction a naturopathic health provider.  This image is captured 02/22/2017.   Note the trapped fecal material and fungal overgrowth.  These plaques may appear, brown blackened and have a distinctive odor.

Responses to therapy, questions and courses of continued care should all accompany a cleansing regimen which is supported by your primary care physician.

Biofilms are found in many forms and colors.  Notable are cohesive structures which do not resemble any food intake or normally formed stool which is discontiguous.  Contiguous film or slime-looking forms are considered to abnormally produced by excessive yeast, (Candida spp. populations/activity)

Below: Choliliths, or Gall stones, expelled in a subsequent  gallbladder/liver cleanse/flush.  Y.east bodies can also be found on close examination 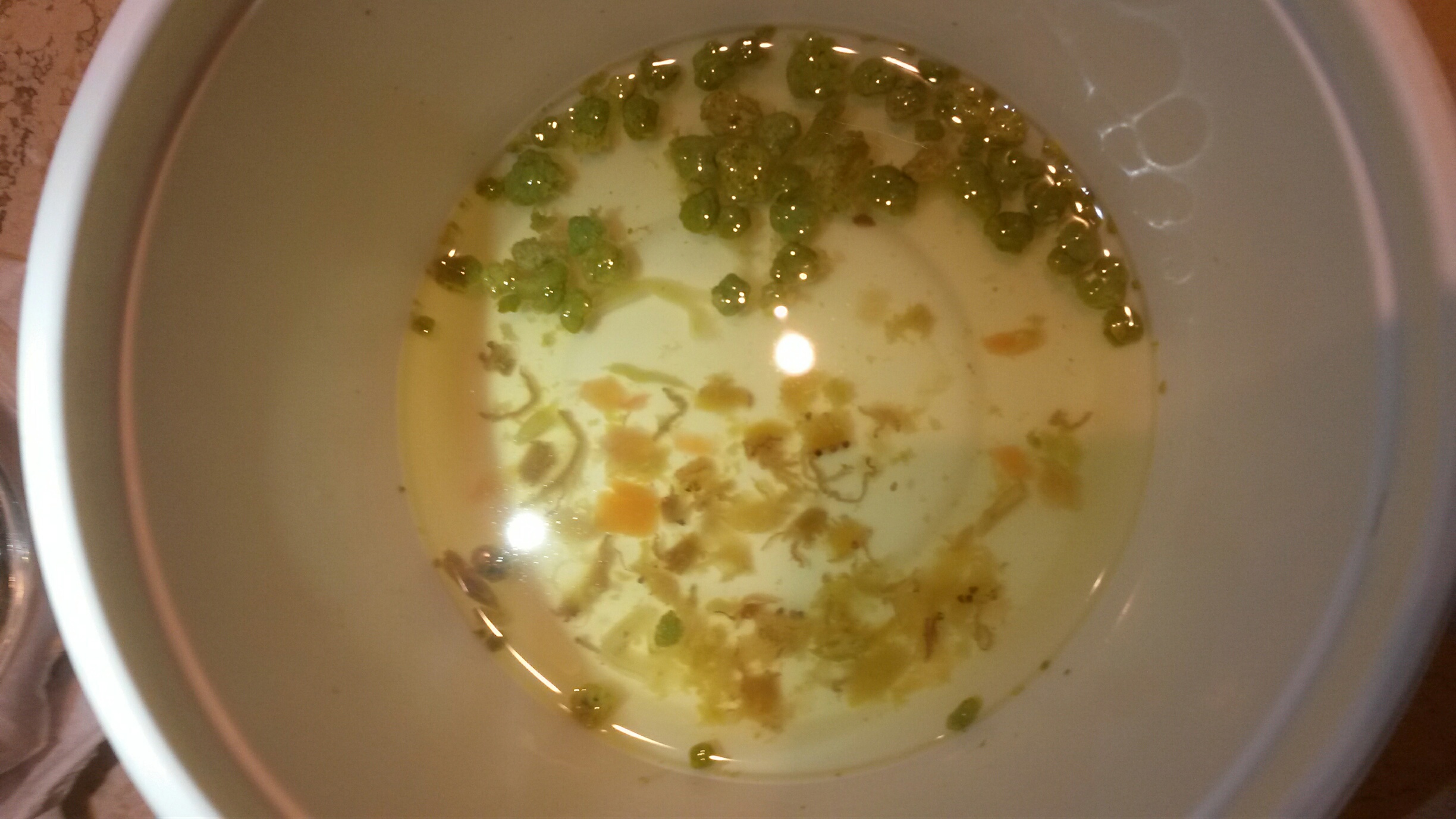 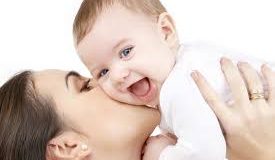 Review of the Basics – PROBIOTICS 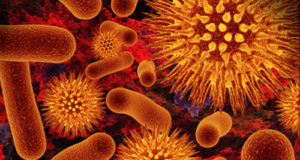