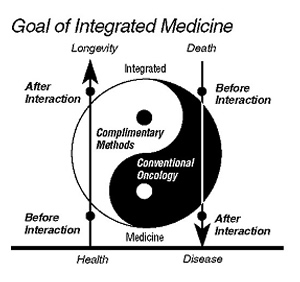 Integrative medicine is the combination of conventional medicine and alternative medicine modes of health care such as herbal medicine, nutrition, acupuncture, massage, yoga or stress reduction. It is a holistic medicine model that recognizes that the whole person is important in health and wellness. Functional medicine takes into consideration why an illness has developed in the first place, so that it can be addressed.

While complementary medicine has been around for a while, some people question the validity of alternative treatments. Integrative medicine tries to combine the most scientifically proven of complementary methods along with conventional medicine.

Both patients and providers often find this “best of both worlds” approach to be more fulfilling.

Functional medicine is also holistic, but is a way of looking at medicine that is based upon finding and addressing the root causes of illness. For instance, a functional medicine practitioner would look at environmental toxin inputs, nutrition and microbial imbalances, how the detoxification system is working, the nervous and endocrine systems, intestinal system function, and the impact of stress. They would look at the genetic and biochemical systems involved in a particular problem and how those systems vary between individuals.

In other words, functional medicine looks at how all systems are inter-related and how they influence illness and health. Rather than focus solely on multiple separate disease entities, functional medicine recognizes disturbances of a web-like interconnected system and aspires to restore health and balance to the foundation of that system.

Practitioners might use any appropriate combination of conventional medicine, nutritional interventions, acupuncture, stress reduction techniques or other sound methods to restore wellness to the system. And, rather than stopping there, these same principle would be used to institute ongoing preventive habits.

Let’s look at an example. Let’s say someone has chronic irritable bowel symptoms. It would be easy in the conventional model to consider that an isolated intestinal system problem. Those symptoms might generate an intestinal system work up. Now, irritable bowel syndrome is a particular problem that has also come to be considered as having a psychological component. So, there is an example of conventional medicine bringing in the possible role of stress, just as a holistic or integrative medicine doctor would.

But wait. Now, scientific studies are coming up with evidence that in irritable bowel syndrome, some people have bacterial overgrowth in the small bowel that might benefit from treatment, the immune system might be involved and respond to probiotics, and the nervous system might be calmed by acupuncture. Maybe some yoga or meditation would improve the contribution by stress.

By expanding the way the problem is viewed, looking for where the root of the problem might be, and drawing upon many different methods of care, a more holistic, functional and integrated plan of care can be offered.

With more of the U.S. population suffering chronic health problems and demanding more holistic health care, we can expect to see approaches like integrative and functional medicine becoming part of the solution.

Source by Ann Haiden, DO
2015-10-01
adminguy
Previous: 4 Keys to Optimum Health – Eat These Super Healthy Whole Foods for Good Nutrition
Next: The 10 Healthiest Foods on the Universe – The Top Ten Super Foods List